Biocytogen is known for its high quality in vivo toxicity studies. We offer services as both independent service offerings and in support of in vivo toxicity and efficacy studies, which include:

A. Anti-human CD40 administration schedule and body weight over the course of treatment Anti-human CD40 antibodies were administered i.p. in homozygous B-hCD40 mice on days indicated by red arrows (n=5). No significant difference in average body weight was detected over the course of the treatment. CBC was performed with anti-CD40 antibodies in B-hCD40 mice two days after the termination of efficacy evaluation experiment.

The blood chemistry was tested with anti-human CD40 antibodies in B-hCD40 mice two days after the termination of efficacy evaluation experiment. Flow cytometry was performed to examine immune cell profiles after anti-human CD40 antibody treatment in B-hCD40 mice. The results indicated that CD40 Ab4 treatment resulted in a significant increase in the percentage of activated CD4 and CD8 T cells and B cells.

F. Activation of B lymphocytes in B-hCD40 mice upon anti-human CD40 antibody treatment

1. Efficacy and toxicity of anti-human CD47 antibody in B-hCD47/hSIRPA mice

Colon cancer MC38-hCD47 cells engineered to express human CD47 were subcutaneously implanted in homozygous B-hCD47/hSIRPA mice, where the extracellular domains of both hCD47 and hCSIPRA replace their respective murine counterpart via genomic knock-in. The mice were grouped as the average tumor volume reached 150±50mm3 (n=5). Anti-human CD47 antibodies demonstrated anti-tumor efficacy in this model. Antibody treatment also resulted in a rapid but moderate body weight loss, which was recovered by day 10. These results indicate that B-hCD47/hSIRPA mice are a useful model for testing anti-human hCD47 antibody efficacy and observing whole body toxicity. Data is expressed as mean ± SEM of tumor volume and body weight.

A. Indication of hematological toxicity by anti-human CD47 antibodies 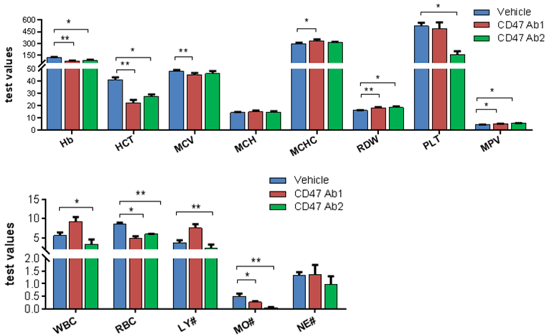 Anti-hCD47 antibodies were i.p. injected into homozygous hSIRPA/hCD47 mice. Blood were collected two days after the treatment and analyzed by Blood Routine Test. Anti-hCD47 antibodies led to liver damage as indicated by elevated levels of liver enzymes in blood in homozygous hSIRPA/hCD47 mice. Blood was collected two days after the initial treatment.