Knock In and Knock Out Mice as Powerful Disease Models Why Do We Care About Gene-edited Mice?

The generation of knockout and knock-in animal models has allowed not only disease research but also the development of disease-fighting drugs. The Nobel Prize for Physiology and Medicine recognized Evans, Smithies, and Capecchi for their joint effort in creating the first knockout mouse over two decades ago in 1989, with knock-in mice to follow. Continued interdisciplinary efforts have since built upon mouse knockout and knock-in methods to successfully study the function of genes, elucidate critical biological pathways, and create animal models for pressing human illnesses, such as neurodegeneration and cancer.

As biotechnology rapidly advances forward, interest in using knockout and knock-in mice to model human disease has only grown. Allowing the regulation, either expression or repression, of both endogenous and exogenous genes, gene editing can be used either to study the mechanisms behind human disease or to test potential therapeutics. Because the studied protein coding regions of mouse and human genomes are roughly 85% identical, mouse models are often used (NIH, 2010). The benefits of using the knockout or knock-in mouse model to study disease include its endless applications and relative ease of manipulation.

Indeed, knockout and knock-in mouse models have been developed to both understand the mechanisms of diseases and discover drugs to treat them. The efficiency of generating knockout mice is significantly higher than that of knock-in mice, as there are many ways to disrupt the endogenous locus but fewer ways to effectively drive exogenous gene expression. To obtain gene edited mice, the CRISPR/Cas9 system is one of the preferred methods available. Offering a more refined product when compared to the random insertions of transgenesis, the CRISPR/Cas9 platform can create both knockout and knock-in mice in less time compared to the traditional mESC based homologous recombination approach.  Biocytogen’s Extreme Genome Editing, EGE®, can knock in exceptionally large DNA fragments, increasing the application potential of knock-in animal models.

Multiple Sclerosis (MS) is an autoimmune disease that has been modeled through the animal model, experimental autoimmune encephalomyelitis  (EAE). A potentially disabling disease, MS is diagnosed when the body attacks its own myelin sheath. When the cytokine, monocyte chemoattractant protein 1 (MCP-1), was knocked out it was discovered that these mice were “markedly resistant to EAE after active immunization” (Huang 2001). These results add to not just the existing understanding of immunogenetic functions, but they also shed light into a possibly critical component of autoimmune disease development. Notably, this MCP-1 knockout animal model was shown to have remarkably reduced clinical and histological effects on autoimmune neurodegeneration, indicating at the role MCP-1 plays in immune response and autoimmune disease induction (Huang, 2001).

Representing 15% of all cancer cases, breast cancer is one of the most common cancers (NIH, 2019). One in five breast cancer cases will be HER2-positive, which are often more severe and aggressive (Moynihan, 2018). HER2 is a cell surface marker, also known as ERBB2, and it is overexpressed in HER2-positive tumor cells (Moynihan, 2018). To model breast cancer induction,  numerous knock-in animal models have been generated to upregulate HER2 or the mouse orthologue Erbb2, many of which take advantage of strong viral promoters to constitutively drive expression. Not only is the HER2 mouse model used to elucidate disease progress, but it is also used in the various stages of drug validation (Fry, 2016).

To more closely model the human breast cancer timeline, the Cre-Lox recombinase conditional gene targeting system was used on the oncogene Erbb2. In the lab, a Cre-inducible homologue of the first exon of Erbb2 was knocked-in. Upon inducing the recombinase, mammary-specific expression of activated Erbb2 was observed along with accelerated mammary epithelial development and subsequent tumor development. These data suggest that tumorigenesis requires “concerted amplification and overexpression of Erbb2 protein” (Andrechek, 2000).

A recent example of CRISPR/Cas9 applied in oncology animal models is the mouse  knockout of CD146. CD146 overexpression has been shown to be sufficient to induce malignant metastases (Ma, 2018). EMT, or epithelial to mesenchymal transition, is an evolutionarily conserved development process that also enhances metastatic properties such as mobility, invasion, and resistance to apoptotic stimuli in cancer cells (Sun, 2016). When CD146 was knocked out using a CRISPR/Cas9 based gene editing platform, the downregulation of regulative proteins of EMT was observed (Ma, 2018). The study demonstrated CD146’s role in driving cell progression into EMT, both in the embryonic development process and in cancer malignancy, identifying CD146 as a target in cancer treatment (Ma, 2018).

Today, CRISPR/Cas9 can globally remove or add genes to the mouse genome, with high precision and efficacy (see Figure 1). Creating knockout and knock-in mice is a fundamental operation of many facilities, but the results take months at a minimum and do not carry a guarantee. Biocytogen’s mission is to help scientists to unlock the bottleneck by reducing their effort, as well as ensuring accurate study results using meticulously designed models.

At Biocytogen, we offer a myriad of gene editing services, including knockout and knock-in animals. Using our Extreme Genome Editing, EGE®, technology, we can deliver a F1 heterozygous mouse line in six to eight months. The efficiency of homologous recombination mediated by the EGE® system is up to 20 times higher than conventional CRISPR/Cas9 technology, which makes gene editing with EGE® system faster and more feasible for complicated targeting design. EGE® system can edit the DNA sequence precisely at almost any genomic locus to achieve many types of desired model generation including global/conditional (c) mutation (m)/reporter knockin (KI), knockout (KO), cKO&cKI, and humanized gene KI, etc. Biocytogen also offers the best-in-class quality control protocol using Southern blot to ensure the successful delivery of each gene targeting project. You can browse mouse models developed by Biocytogen that are currently available to order. Contact us now to request your custom gene-edited mice. 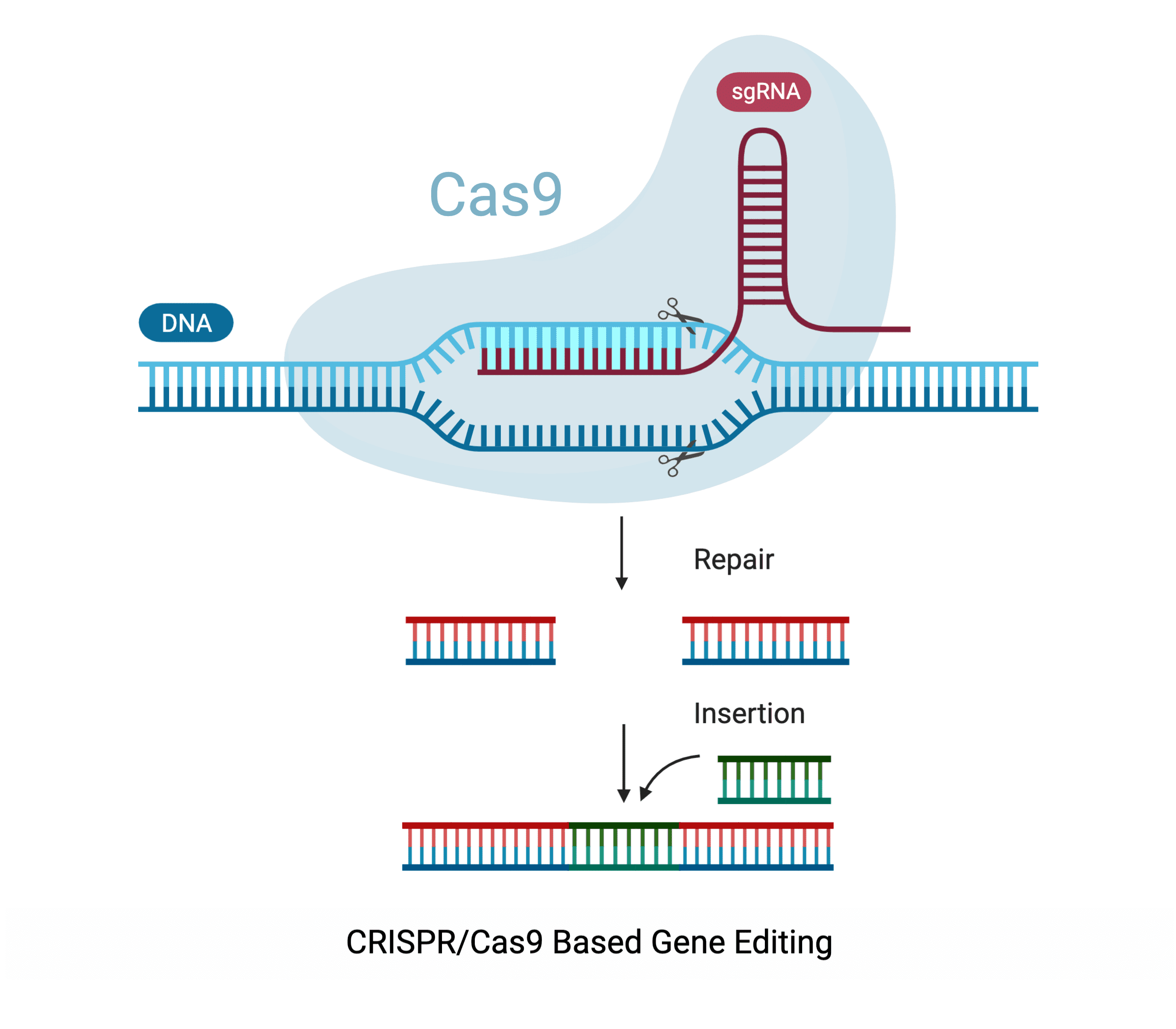 (Figure 1. CRISPR/Cas9 Based Gene Editing. Using a guide sgRNA, the CRISPR/Cas9 gene editing platform identifies the specific sequence to be modified. That sequence is then “cut out” and replaced by an insertion gene. Image from Biocytogen)