All conditional disease models utilize the Cre recombinase protein, which mediates a tissue specific deletion of DNA fragments that are flanked by loxP sites.  Conditional mouse models derived from these Cre mice lines express Cre recombinase under the control of a certain tissue specific gene promoter. In other words, the Cre mouse model allows tissue specific gene modification based on promoter activation.  The LoxP mouse line has two loxP elements flanking the entire or part of the gene of interest, giving the loxP mouse defined gene(s) to be edited. In conditional knockout animals the gene is deleted only in selected cells, as determined by a tissue specific promoter. Conditional knockout mouse models are usually generated using Cre-LoxP, Dre-Rox or Flp-Frt recombination systems for permanent gene alterations in specific tissues. A conditional Knockout (cKO) model is generated via several steps, using Cre-LoxP system as an example: 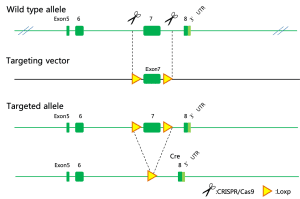 The targeted fragment to be knocked out is flanked by LoxP elements. Floxed mice are then bred with tissue-specific Cre or CreERT2 mice, and sequences between LoxP sites will be removed from the offspring’s genome in a spatial and/or temporal manner.

In a conditional knockin (cKI) mouse model, mice containing a floxed (or conditional) allele are crossed with Cre-expressing mice, allowing for tissue-specific expression of any exogenous elements, including mutation, reporter, etc. Conditional Knockin mouse models are usually generated using either FLEx (Flip Excision) approach (also known as dual-lox system) or minigene system. After Cre-lox recombination by having conditional knockin mice bred with tissue specific Cre or CreERT2 mice, the mutation/reporter will be expressed in a spatial and/or temporal manner. Contact us today to find out how we can help advance your research with custom generated rat, mouse or cell line models.